Oiling the wheels of industry

Crude oil remains unsubstitutable for many applications. RAG has been producing oil in Austria for over 80 years, and thanks to the use of 3D seismic and new technologies we continue to develop existing fields as well as finding and developing new fields – ensuring continued production for decades to come.

The oil fields in the RAG Group’s permits are small in international terms, and sophisticated technology is required to tap the reserves. The oil mostly occurs in reservoir rock going back to the Jurassic and Cretaceous periods of the Mesozoic era. These formations are 100–200 million years old, and are mainly at depths of 1,000–2,500 metres. 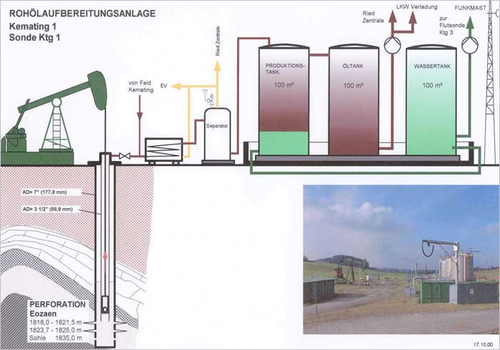 When a section of a well has been drilled, casing and tubing are inserted. Ideally, during the first stage in the life cycle of a field, the oil finds its way to the production wells and rises to the surface of its own accord, due to the natural reservoir pressure. When the pressure falls it is necessary to use techniques such as gas lift, which involves injecting pressurised gas via the production string. The gas reduces the weight of the column of liquid, meaning that the well can continue to produce under its own steam. After this stage (known as the eruptive phase), a range of pumping technologies can be used, depending on the properties of the crude, its gas content and the pressure conditions. Where the gas content is low and the reservoir pressure is falling, the oil is brought to the surface by deep well pumps. Only the pumps’ drive mechanisms – the characteristic pumpjacks – are visible on the surface. Electric rotary submersible pumps can be used to achieve higher flow rates.

In its produced state, crude oil is not yet suitable for transportation and refining, and it must first undergo a number of processes. Given favourable circumstances, in the shape of a strong inherent drive mechanism and good reservoir conditions, primary recovery of over 50 percent of the reserves in place is possible. However, if the reservoir pressure is weak or the crude is highly viscous, the primary recovery rate may only be between five and 15 percent. After the crude has been produced the formation water and sand in it must be removed by treatment systems (separators and tanks). The associated gas goes straight into the grid as soon as it has been dried, but the crude is collected in tanks before being transported to a refinery by rail or pipeline. The separated water is pumped back into the reservoirs it has come from.

At present over 60 percent of the oil reserves in place stay in the ground. RAG is carrying out research into methods of raising the recovery rate so as to ensure that Austrian oil remains available as a feedstock for domestic industry for many years to come. As there will be no “post-petroleum age” when oil is no longer needed, good stewardship of this invaluable resource is vital.

RAG produces about 120,000 tonnes of crude oil a year from its Upper and Lower Austrian fields. A pipeline conveys the Lower Austrian output straight to Schwechat Refinery. The crude produced in Upper Austria is collected via gathering lines, and centrally loaded into tank wagons in Kremsmünster and Ried for rail transportation to refineries. It is marketed in Austria, supporting security of supply in the country. The crude produced is easy to process as it contains few impurities. Depending on the fields they come from, our grades are either paraffin or asphaltic base crudes, with similar quality specifications to Brent blend.

RAG‘s oil production activities began at the Gaiselberg field in Zistersdorf, Lower Austria, in 1938. Oil has been produced from that first well ever since, making it one of the oldest active oil wells in the world. This reflects the field‘s extraordinary geological features, as well as our environmentally friendly, sustainable approach to oil production in one of Austria‘s oldest wine-producing areas. The high-efficiency methods used help to conserve resources, and could serve as a model for the major oil-producing countries.